After the engraving machine had expanded my workshop equipment in 2020, I chose a personal loge.

First it was an eagle, which reminded very strongly of an Italian motorcycle brand. To avoid any disputes I found a graphic with a stylized eagle. This graphic was freely available on the Internet. I changed this eagle a little bit and after that my log looked like below.

Now my machines, tools and models are marked with this logo. 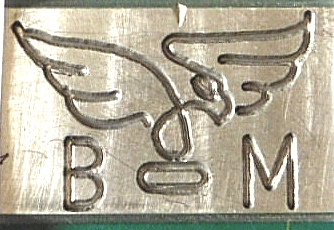 I was born, more than 60 years ago, in a small town in the rural Rhine-Hessian Wonnegau.

Went to school and also graduated - that was the way it used to be.

In the following years, I successfully completed an apprenticeship as a machinist.  That was also common in that time.

After the basic military service and altogether 2 years with the German Federal Armed Forces as a soldier on time, I worked in several companies and with 25 years I decided to do something completely different.

I went back to school to complete another training for the civil service. Since then I was responsible for security and order.

During my time of service at a state authority, I acquired the passenger transport license and completed further training at the hospital and as a paramedic. After that I worked in the medical department of the authority for 15 years, until 2005.

This was followed by a new assignment in the authority, in the area of service for outside companies, until my retirement at the end of 2017.

I have now left the active professional life behind me and now concentrate myself only to my wife, grandchildren and my hobbies.

You will find some information about my hobbies on these pages.

Already at a young age I was interested in model making and occupied with it.

I have always made sure that my profession or the activity I am currently working on is not my hobby.

It started in my early years with simple paper models made from pattern sheets and later the well-known model kits from Revell were added. These were real dust catchers which drove my mother to despair.
At some point I also thought I could build and fly remote controlled airplanes.

When the children got older and the space in the flat became scarce, I tried my hand at building a model railway in N-gauge. It was actually meant for the children, but Daddy was probably the reason for this story.

Since about 1986 I have been engaged in steam engine model making. Professionally I had nothing to do with metalworking anymore.

I started with a small lathe from the company Emco, a Unimat 3, which was equipped with all imaginable accessories, which were necessary for metalworking. Unfortunately I sold this machine.

After that I got a bigger machine from a French manufacturer, in the size of an Emco 5, which was sold by Lux. I bought this machine as a used machine and sold it again after a short time.

Afterwards I bought the lathe and also the milling machine, which are now still standing in my cellar.

In the beginning I had to throw one or the other part into the scrap box and produce it again. The exercise was simply missing, but the basic knowledge was still there.
After several model steam engines I also built a steam locomotive for the gauge "5 inch" (127mm) scale 1:11.
This will probably only be completed during my retirement.
In between I have built several steam feed pumps for the locomotives in several small series.

As a result of the model building activities, I was in a responsible position in a steam train club for 12 years.

Furthermore I am still an active member of the fire brigade of my place of residence and in this context I am also responsible for the instruction of the young firefighter comrades of the association municipality in the firefighter driving licence.

Since spring 2009 I own a Moto-Guzzi-California and in summer I am often on the road on my motorbike. You can find some reports about this under "Tours".

I do the maintenance and the necessary repairs on my motorcycle myself.

Because of the motorcycle tours there is less work in the workshop.

The next winter will come for sure and then I will not be on the road with the motorcycle. Then also the workshop will be used more.